On Friday, March 3rd, some of our team flew down to Orlando, Florida in preparation for an exciting week filled with committee meetings, learning sessions, exhibition periods and networking events. RFMA 2017 was soon underway. Patrick and I (Kristen) spent Saturday attending committee meetings for the Vendor Voice board and the member engagement committee. Lunch was enhanced by inspiring speakers and our day eventually drew near an end with a cocktail reception exclusively held for committee and board members. After speaking with our groups on monthly conference calls, it was great to meet restauranteurs and vendors in person.

Sunday was off to a memorable start as four of us made our way to the start of the Fun Run benefitting RFMA Gives. After our inspired costumes from last year left their mark, the RFMA team created awards for the best dressed team along with a women’s and men’s first to finish. So we suited up in the parking lot and began inflating our 75F balloons with helium. A little late to begin, we soon became quite the spectacle as we jogged around the facilities. As we approached our first child near the Gaylord resort, her face lit up in amazement and she began to clap her hands.

“That right there made this whole thing worth it,” Patrick remarked.

As I followed the two giant orange inflatable suits, I nearly doubled over with laughter. It’s a real challenge to take anything seriously when you’re jogging behind this, but I managed to snap some photos. After we all had a good laugh and a challenging jog, we were greeted by the best dressed award from the RFMA team! By this time Patrick had deflated, literally, but still wore a smile. Legend, also from the Twin Cities gave us a run for their money as they dressed up like Babe and the Blue Ox. Fortunately, they received an honorable mention from the RFMA team which was well deserved!

From there I attended a Females in Facilities event on the lawn where we played many games and enjoyed a delicious lunch. Shortly after that, I attended the new member café, where I helped to greet first time RFMA attendees, both vendors and restauranteurs alike. At 4pm Patrick represented our team at the Express Exchange, otherwise known as speed dating. During this opportunity, he had just a few minutes with individual restauranteurs to learn about their pain points and to define how 75F could address those. As soon as that was over, it was time for the opening party!

The well-orchestrated and beautiful opening ceremony was held on the Gaylord center lawn. We had the opportunity to mix and mingle while listening to an incredible violin trio. Hors d'oeuvre stations were spread across the lawn and we enjoyed drinks under the Orlando stars. RFMA brought in professional artists who painted the logos of all of the opening party sponsors on canvasses.

Monday kicked off early with a continental breakfast at 7am, followed by the opening general session featuring an inspiring talk from Mel Robbins! The exhibit hall opened just before lunch, where the team learned about the attending restauranteurs and their HVAC and lighting needs. Known for hot and cold spots, as well as pressure and equipment maintenance issues, we helped the restauranteurs understand how these issues can help be resolved with some of the 75F solutions.

Right after the exhibition hours ended, I had just enough time to make it to our CEO Deepinder’s learning session, “Internet of Things, IoT Today and Tomorrow- Practical Use for Facility Manager". This educational hour was comprised of three speakers who spoke about Energy Management Systems (EMS's). Deepinder was the final speaker, addressing the future of the Internet of Things and changes we should expect to see in upcoming years.

He did a fantastic job of speaking and answering questions in regards to IoT security and more. The day proceeded with another few hours dedicated to the exhibition floor, where we featured a chair massage therapist as nod to the comfort  our solution provides. Once booth hours were over, we hosted a dinner at the lovely Villa de Flora at the Gaylord. It was fantastic to have the opportunity to spend time with some of our favorite customers and top prospects. A special thanks to Border Food’s Brian Davies for joining us and answering prospects’ questions from the customer perspective. We are very grateful to have such a committed and respected partner, who is a real RFMA influencer! We enjoyed getting to know some of the restauranteurs firsthand and learning about their pain points. We finally wrapped up dinner well after 10pm and headed back for a night of rest.

Tuesday was the final RFMA day, filled with more learning sessions and two sets of booth hours. It was great to see some of our dinner guests from the previous night return to our booth to see our product firsthand. Our lunch session included a RFMA award ceremony hosted by Jason Hewlett, an incredible singer and entertainer. I was also able to secure our booth for 2018 and follow up with some restauranteurs from the night before. The final booth hours ended at 4pm and after getting our packaging back, we had everything packed and ready to ship out by 6:30, just in time to head to the closing party.

The RFMA team really outdid themselves this year, as the closing party location and entertainment was incredible. Dinner was delicious and the dancer/performers at Mango’s Tropical Café were insanely talented. Our CEO, Deepinder, really stuck out as he took to the dance floor in his orange boots, shirt, turban and bright orange cape from the Fun Run. Exhausted from the week and yet invigorated from the atmosphere, the whole 75F team danced the night away, to our hearts’ content.

Energy Savings Are In & 75F Rolls Out Smart HVAC Solution

Why an Energy Management System is Cheaper 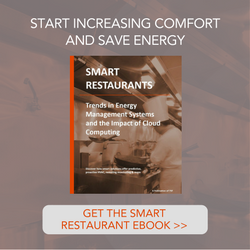